Help us fund our priests' retirement!
The priests of the Diocese of Gallup give their lives in service - now we can give back by supporting their needs! 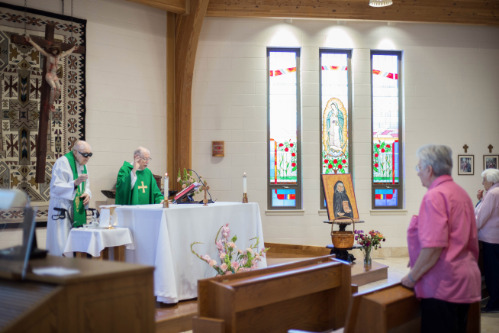 After years of service, the last thing a priest needs to worry about is a roof over his head, or where his next meal is coming from. Fr. Jim Walker, who is currently serving in his retirement as the chaplain for the Little Sisters of the Poor home in Gallup, describes the importance of the Diocese of Gallup's Good Shepherd Retirement Fund.

What do most priests need the retirement fund for?

The reality is, we are still a poor diocese. To take care of our elderly priests, we just don’t have the resources.

Individual priests, well, they use it for, you know, clothing, sometimes some medical bills have to be covered by the individual, personal needs, just like everybody else. A priest, even though he’s retired, is still active to a point in ministry. We’re hard-pressed now to find supply priests – very hard. The Bishop has been able to at least hold the fort so that the Eucharist is available in most places where it needs to be available. I think somehow we manage to cover, but it’s a real struggle.

A priest is responsible for his own housing. There are spaces available in some rectories around the Diocese. A common thing with a priest anywhere is being near a medical facility, and sufficient medical care. You think about this a lot when you’re approaching retirement.

We’re fortunate to have the Little Sisters of the Poor [nursing home] here – what would happen to some retired priests if there was no home like this? Where would you go?

Good question. I don’t know where they would go. It’s case by case. [mentions some priests who move in with others] Some priests, on the books, are fully retired, but still fully active, for now. Then where do they go? I’ve heard some priests say “well, I’ll go to the Little Sisters”, like it’s an automatic. But I don’t see that it can be automatic – I don’t think it’s fair to the home. And some priests might be in a condition where they can’t take care of them here. So the Diocese will be obligated to take up the tab.

Do you think people would be surprised at how active even retired priests are? I mean, you’re “retired”, but it’s almost like it’s in name only.

I don’t think people really understand – some might, but the majority, I don’t think so. People in Bloomfield and Blanco might think “oh, Fr. Jim retired, he’s down in Gallup at the Little Sisters and that’s the end of it.” Perhaps I could be a lot more active. When some of the priests heard I was retired, they approached me, you know “are you gonna be available for weekends?” I find it more and more difficult to drive, and as you get older, it only gets harder. So I can just help locally.

Do you think sometimes even the younger priests have a hard time?

Yes, clearly. Here at the home, Tuesday’s my day off. It’s a little different because you live in close quarters. When I was in full-time, active ministry, my days off were few and far between. Even the Bishop called me one time and said “Father, you’ve got to take your day off.” Even with that, it would be so easy to excuse it away.

Things like funerals, parishioners who were dying, suicides, drug addiction cases, all kinds of things like that, it’s pretty hard to say “I’m sorry, tomorrow’s my day off.” Sometimes just the daily demands, like the last year up [in Blanco and Bloomfield], building the new family center. That took a lot of time.

It’s interesting, I would say no priest, in a parish, can tell you on Sunday evening what the rest of the week looks like and have it turn out just that way. Or people just dropping in – in the seminary they were always talking about the priest being available. Some priests are notorious for not being available – they shield themselves.

Knowing how difficult it can be sometimes, would you do it all over again – live in service to the Diocese?

Yeah. Yeah. Because I always enjoyed what I was doing, no matter where. Even administrative work…I feel very strongly about obedience to the Bishop. It might not be my druthers, but if he asks me…when he asked me to be Superintendent of Schools.

So if you only had a brief moment to convince someone that the priests’ retirement fund is worth donating to, what would you say?

The priest has no other support. The support for the majority of priests is pretty limited. Even in an area where the cost of living is reasonable, some priests would even struggle to do that. Some of our priests have had to go into low-income housing. I think we can do better than that.

We are one of the lowest-paying Dioceses in the country, no question. People say “you should have been investing all these years”. What does [a priest] have to invest? Not much. I come from a whole different set of circumstances because I came in so late. But the majority of the rank and file priests in this Diocese, who worked for years, it’s amazing how some of them get by.